Heidi’s childhood trees live on as a floor

Eleven-time world arm-wrestling champion and married to biathlon champion Björn Ferry. A TV personality with productions such as the children’s programme Miljöhjältarna (‘The environment heroes’) and documentary series Storuman Forever to her name – most Swedes today know who Heidi Andersson is.

Through persistent hard work, she has worked her way into the heart of Swedish society with her indomitable energy and uncompromising message: we have to change the way we live, for the sake of the planet. Storuman Forever was an eye-opener for many Swedes, and Heidi and Björn’s goal of living fossil-free by 2025 has become a brand promise to the Swedish people.

However, Heidi isn’t just a TV star and sports personality, she also holds the forest close to her heart. The forest has always played an important role in Heidi Andersson’s life, and when she was awarded the title of Honorary Doctor of Forest Sciences by the Swedish University of Agricultural Sciences, it felt like the most natural thing in the world.

The little village of Ensamheten (which would translate to "The Loneliness" in English) in Lapland is little more than a clearing in the forest, containing a few houses and assorted other buildings. This was where Heidi grew up, and some of her relatives still live here today, including her father Kent, who has worked in the forest all his life.

"He worked for the Swedish National Forest Enterprise, before starting his own company. He’s one of the few manual wood cutters still left today", Heidi explains. "He picks up where the forestry machinery fails. On plots where there’s not much space or where it’s difficult to fell the trees, or in inaccessible areas where it’s simply impossible to bring in the machinery."

Heidi has clear memories of her childhood, when her father would often come home from a day at work with a pounding headache. The hard work out in the forest wasn’t a problem in itself, and this dull ache had another explanation; the exhaust fumes from the chain saw were seeping into his body through his nose and mouth, and the problem was particularly bad when working under dense firs, where the air circulation was obstructed by dense branches.

However, something happened in the late 80s. Rumours began to spread that there was a new fuel for chainsaws on the market. This fuel was called Aspen, and everyone who tried it noticed the difference.

"He’s been using Aspen ever since, and he’s been feeling a lot better for it", states Heidi Andersson.

”He’s been using Aspen ever since, and he’s been feeling a lot better for it” 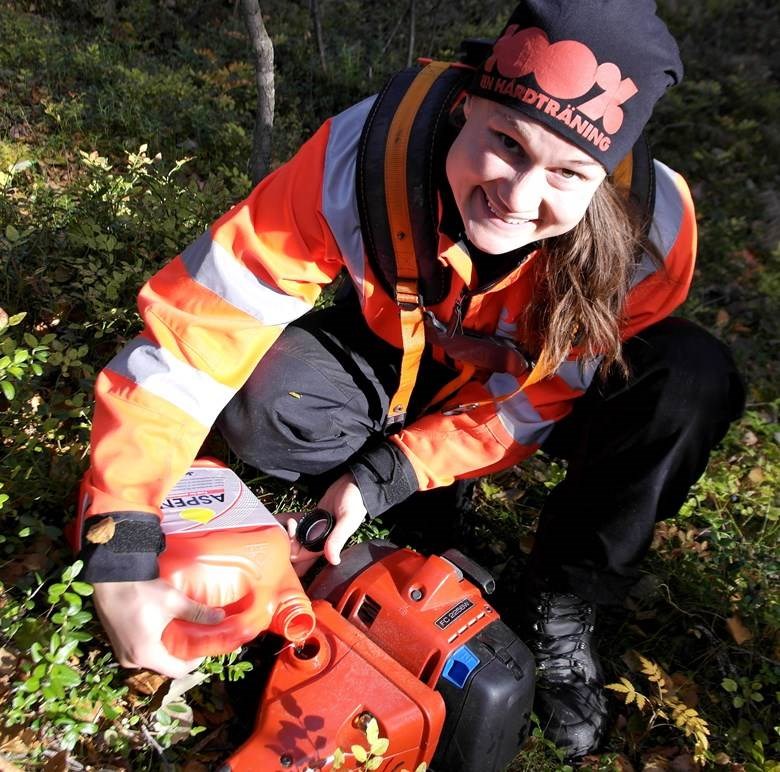 Simply put, Kent Andersson was one of the people Aspen was developed for – the kind engineer Roland Elmäng had in mind when carrying out his experiments to design the fuel. For Heidi Andersson, Aspen has been a natural part of forest life for years, and it remains so today.

"We have quite a few different pieces of machinery in my home village of Ensamheten. Saws and planing machines, for example, which we use with Aspen D."

Heidi used the saw and planing machine when she was felling in her own forest, for example. Because if anyone were to have their own forest, it would be Heidi Andersson. When not busy with arm-wrestling, speeches, or TV productions, she can often be found out in the forest. Planting, felling, thinning or just enjoying nature.

"This year we’ve planted 25,000 seedlings and carried out a controlled burning. And tomorrow I’m going to go and lay a floor made of planks we felled, sawed and planed at our sawmill in Ensamheten."

”This year we’ve planted 25,000 seedlings and carried out a controlled burning. And tomorrow I’m going to go and lay a floor made of planks we felled, sawed and planed at our sawmill in Ensamheten.”

The floor will be locally produced in a way that brings a whole new meaning to the concept. That is to say, it will be made of planks sawn from trees grown at the farm in Ensamheten where Heidi grew up. The trees have been felled, sawn and planed to create a floor for the cottage Lerberg, which Heidi Andersson and Björn Ferry are renovating from top to bottom.

When the trees you climbed as a child live on as a floor in your own house, you’ve truly earnt the right to talk about the cycle of nature. And this is something Heidi Andersson is fond of.