“The circular economy is based on the value of products, materials and resources being retained within the economy for as long as possible primarily through reuse.”

You do not have to mow your lawn with a robot lawn mower to make a contribution to the environment and the future, keeping and caring for your old petrol machine can be just as good an option. How so, you must be thinking. Well, by taking care of your lawn mower with regular servicing and refilling it with a fuel that is ethanol-free, storable and that makes machines easier to start and maintain, season after season, they will go a long way. 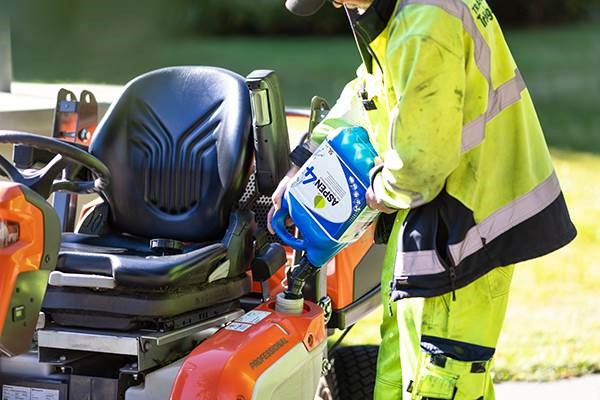 There are still many people who refill their machines with regular petrol instead of alkylate petrol. There may be several reasons for this: habit, availability, price, etc. Not least in these times, price is an important factor, and yes alkylate petrol costs a few cents more per litre than regular petrol. But the advantages are many if you replace petrol with alkylate petrol and you fill up with Aspen there are even more.

Did you know for example that your machines last longer with Aspen alkylate petrol? Because the unique mixture contains components that even clean the engine. Unlike regular petrol, Aspen does not contain ethanol or other solvents.

Regular petrol, E10, means that the petrol has a 10% mixture of ethanol and is specially produced for everyday use of “year-round” engines, for example, passenger cars. But, ethanol is a component that can cause corrosion and bind moisture in the fuel which in turn causes hard-to-start engines and uneven running. Ethanol is also a solvent than can dissolve dirt and deposits that have built up in a fuel tank over time, which result in clogged fuel systems. This can lead to a hard-to-start engine and uneven running of the engine.

As regular petrol is not suitable for storage, this creates a big problem for small engines that are only used during certain seasons – for example, lawn mowers, boat engines, brush cutters and snow blowers. When these have E10 in the tank, the following happens:

In short, if you fill up your machines with Aspen alkylate petrol, there is a good chance that the engine will start on the first pull after winter storage, that it will run smoothly and efficiently and will not soot again.